Sinorblog / Doing business in China / How the coronavirus and travel ban impact the..

How the coronavirus and travel ban impact the Australian tourism industry

In Australia we’re now one month into the travel ban imposed on non-Australian citizens arriving from mainland China to prevent the spread of the novel coronavirus (Covid-19).

And while some mainland Chinese are starting to return to work, it’s difficult to assess how long the crisis and lockdown are going to continue with more cases of the virus now appearing in Europe.

We have previously written about how businesses can best deal with the coronavirus while government authorities around the world are working to get the situation under control. In this blog post, we’re zooming in on the Australian travel and tourism industry which has been hit especially hard by the travel ban. Not only did it happen right after many destinations have been devastated by the bushfires, it also coincided with the Lunar Near Year which is usually one of the busiest seasons for visitors arriving from China. According to a recent Roy Morgan Survey, 15% of Australian businesses have been impacted by Coronavirus (COVID-19) as of Mid-February.

I had the chance to talk to China strategy consultant and Tourism Australia’s former country manager for China, Andy Jiang, to discuss the long-term implications of Covid-19 on the Australian travel industry.

What is your estimate of the travel ban on the Australian tourism and visitor economy?

My best assessment on its direct impact on the Australian visitor economy for the month of February: $838 million. This assessment does not include impact on the international education sector.

The chart below captures my forward estimate for each month that a full travel ban remains in place. The impact would gradually reduce due to the cyclical nature of Chinese inbound visitors.

You will find a $78 million impact to the month of January. That is because the Ministry of Culture and Tourism (MCT) issued an outbound travel ban on all groups on 24th January, one day before the Chinese New Year. MCT’s ban affects 23.5% of inbound leisure travel from China, and is expected to remain in place until the Chinese government is ready to announce the coronavirus outbreak is over.

The travel ban caused an almost immediate cancellations of flights from and to China. What’s your assessment on the long-term implications for the aviation industry?

What’s important to highlight in this context is that the airlines didn’t cancel flights because of the travel ban, but because the lack of traffic made it quickly commercially unviable to support the massive aviation capacity we had between China and Australia.

I do believe that the travel ban is going to have a long-term impact on the routes we’re going to see return once the ban is lifted though. Many flights to more 2nd tier cities in China simply won’t be restored because the crisis has put Chinese airlines are under significant financial stress. Before the travel ban, these routes have been heavily subsidised and I don’t think the airlines will be in a position to restore the ones that are cashflow negative.

The graphs below are based on publicly available data on airline routes. It’s a summary of aviation capacity between China and Australia before the travel ban, during the travel ban in February. 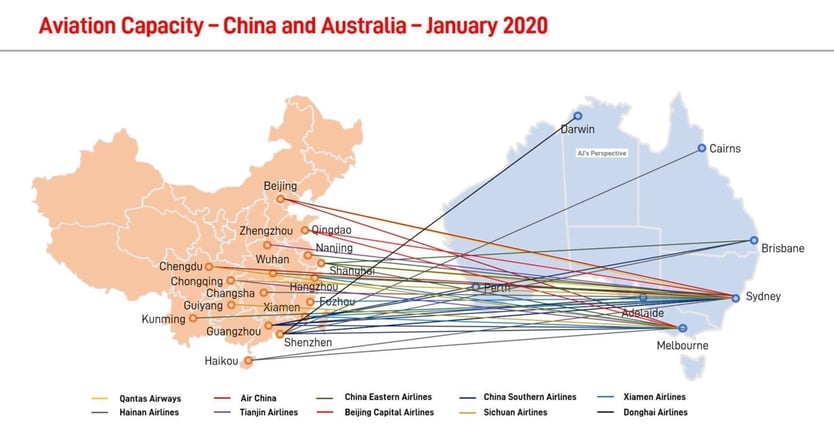 I think that we will lose many of the original routes after the travel ban is lifted. And how quickly we will be able to regain them will very much depend on how long the situation is going to continue. Airlines plan their routes on a three month schedule, so if the ban continues beyond March, it’s likely that airlines will cancel routes until June.

The Chinese government has criticised Australia for putting the travel ban in place virtually overnight.  Will the way that the travel ban has been implemented have an impact on how Australia is viewed in China more generally?

I personally think that the travel ban has been clumsily implemented. Because of the time zone difference, Australia was the very first country to implement the travel ban and at extremely short notice.

This meant that people were denied entry at the airport and visas were cancelled. The way the communication has been handled in the process has left the impression that Australia is unfriendly towards China. The Chinese government is under a lot of criticism at the moment, so it’s not surprising that they were looking for avenues to vent their frustration. And Australia has given them one.

Do you think the virus and travel ban will put a damper on Chinese’s appetite for travel?

I don’t think it will impact the Chinese desire for travel. Once this whole thing is over, Chinese will travel again. The question is where will the go. And there are both rational and emotional factors playing into this decision.

On the rational side, economics will certainly be important. Many businesses in China already had to cut salaries to make it through the crisis. This may mean that there’s less disposable impact circulating and Chinese travellers will opt for destinations with cheaper airfares. And of course if we’re seeing an increase in demand with a lower number of flights, the airfare prices are going to go up.

On the emotional side, Australia and the US are not scoring brownie points at the moment when compared with the UK and Canada. Marketing can help with that but any meaningful activity will need to wait until after the travel ban is lifted.

It’s also likely that the Chinese government will shorten the holiday during Golden Week in October. This is to make up for the additional week when business was on hold over the Chinese New Year. They may also discourage long distance travel and encourage domestic travel to support the local economy – just as we do in Australia after the bushfire crisis.

My recommendation to the tourism sector would be to look into the domestic Chinese market, as well as Chinese living in the US and New Zealand. There are many opportunities where people just haven’t been paying attention. But the tourism industry still needs to understand that this requires a separate strategy with the digital marketing channels to support it.