Sinorblog / Doing business in China / Made in China 2025: what it means for..

Made in China 2025: what it means for international manufacturers

In 2015, the Chinese government launched an ambitious industrial policy program called “Made in China 2025”, with the aim of establishing the country as a manufacturing superpower. Since its launch, however, the initiative has provoked much friction internationally, with countries like the US fearing China’s expansion and dominance in strategically important industries.

So what does this mean for international manufacturing?

In this post, we delve into Made in China 2025, including: what it is, how China aims to meet their goals, how foreign businesses and industries will be affected, and what organisations can do to stay competitive.

Made in China 2025 is a state-led industrial policy that aims to make China a global leader in high-tech manufacturing. The 10-year strategy focuses on 10 strategic sectors (see below) that contribute strongly to economic growth in advanced economies, including robotics, artificial intelligence, aerospace and aeronautical equipment, and electric vehicles. 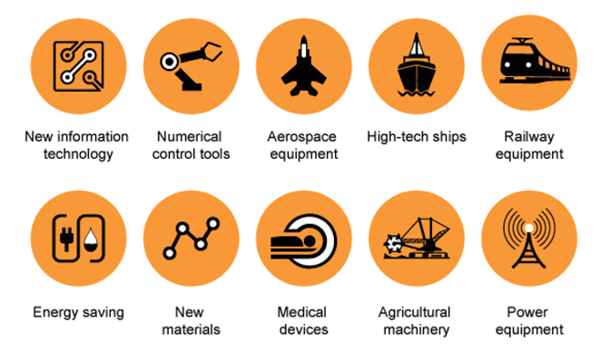 These sectors are seen as critical to the “fourth industrial revolution”, which refers to the ongoing automation of traditional manufacturing and industrial practices using modern smart technology, including big data, cloud computing, and artificial intelligence. Indeed, the policy was inspired by Germany’s “Industry 4.0” initiative, though on a much larger scale. China seeks to upgrade its industrial and smart manufacturing capabilities by ensuring that innovation, product quality, efficiency, and integration drive manufacturing across these 10 key industries.

The policy is seen as a critical element in China’s sustained growth and competitiveness for the coming decades as it transitions into a developed economy.

Ultimately, the goal is to reduce China’s dependence on foreign technology and promote Chinese high-tech manufacturers in the international marketplace. If they succeed, China may be able to reposition themselves from a low-cost manufacturer to a direct competitor with nations like South Korea, Japan, Germany and the US.

How does China propose to reach their Made in China 2025 goals?

One way China hopes to reach their goals is by increasing the domestic market share of Chinese products, and they’ve set ambitious, if “unofficial”, targets in this regard. For example, by 2025, 40% of mobile phone chips on the Chinese market should be produced in China, as well as 80% of electric vehicles and renewable energy equipment. 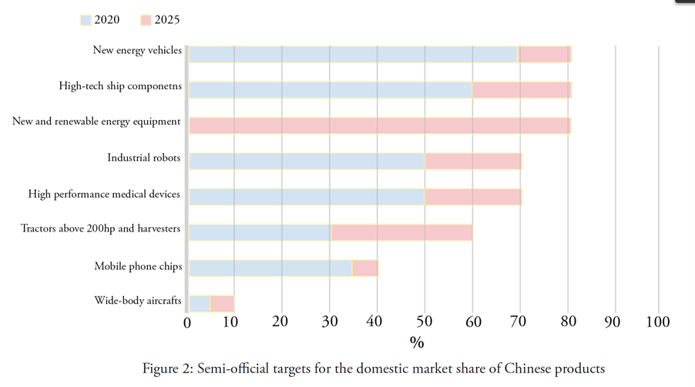 The government has also introduced various targets for companies, including an increase in research and development (R&D) as a percentage of sales from 0.95% to 1.68%, a 7.5% labour productivity increase by 2020, and a 35% decline in energy and water consumption per unit of added value by 2025.

Chinese tech companies seem to have committed to reaching these targets – Baidu, for example, have been granted permits and licences to test self-driving vehicles, and they have also launched “Project Apollo”, a platform that provides hardware and open source code for other manufacturers to develop their own vehicles.

The Chinese government has pledged to increase financial support for the 10 sectors through state funding, low-interest loans, bonds and tax breaks, with estimates putting their total contribution in the hundreds of billions of dollars.

For example, the government is providing subsidies for companies pursuing electric batteries, and they have provided a semiconductor fund for Xiaomi to develop the company’s first smartphone processor. They’ve made $3 billion available through the Advanced Manufacturing Fund to upgrade technology in key industries, while the National Integrated Circuit Fund has access to $21 billion. Crucially, funding is linked to the use of indigenous intellectual property (IP), as an incentive to encourage companies to replace foreign IP.

Chinese companies, both private and state-backed, have been encouraged to invest in foreign companies in order to access advanced technologies. Between 2005 and 2016, Chinese companies invested $13.6 billion in Germany and $135 billion in the US, and often these investments have involved direct state funding. We can expect to see this continue to ramp up in the coming years, as these international partnerships are a key tool for gaining access to foreign IP, which can be used to enhance the capabilities of Chinese companies.

State firms account for a third of gross domestic product (GDP) and an estimated two-thirds of China’s outbound investment, and many of China’s privately run global tech leaders, such as Huawei and ZTE, are also supported by the government. This gives the government a lot of influence and enables them to direct resources towards these key sectors.

In order to do business in China, foreign businesses must enter into joint ventures with Chinese firms under terms that require them to share sensitive IP and advanced technological know-how. This has allowed them to acquire technologies such as high-speed rail and electric vehicle batteries.

How will this affect industries and foreign businesses?

In the short term, China’s Made in China 2025 push may actually be advantageous to foreign firms, as the need to boost China’s manufacturing capabilities will create the need for technologies such as industrial robots, smart sensors, wireless sensor networks and radio frequency identification chips – technologies that Chinese suppliers are not yet advanced enough to provide. This could potentially be a boon for international companies in countries like the US and Germany, who have the capabilities to supply these technologies.

Chinese companies also have the benefit of government financial backing and subsidies, as well as preferential policies, making it difficult for foreign companies to compete on Chinese soil, and a policy such as Made in China 2025 will only make things even harder for foreign competitors going forward.

As China grows their capabilities at home, this prepares the ground for them to be able to compete directly with high-tech powerhouses like Germany and Japan, further threatening the market share of international enterprises.

What can organisations do to stay competitive?

According to the Mercator Institute for China Studies (MERICS), there are several steps organisations can take to protect themselves and stay competitive in the face of Made in China 2025.

While European and American companies are still well advanced in the use of smart manufacturing compared to their Chinese competitors, Chinese enterprises will quickly catch up, as they have done so many times in the past. Manufacturers therefore need to be careful about becoming complacent, and continue to focus on their own technological advancement.

Coordinate with other foreign companies

As mentioned, international companies in China are at a distinct disadvantage compared to their domestic counterparts. It may be worth coordinating with other foreign companies to create negotiating power through collective pressure. This can help to build leverage in order to influence Chinese leadership’s decision-making on industrial policy and cybersecurity regulations.

As mentioned, China is looking to gain IP through overseas investment and joint ventures, and while such arrangements can be highly beneficial for both parties, foreign enterprises need to tread with care, particularly if they are based in China, where increased digitisation combined with weak data security can make core technologies particularly vulnerable.

One precaution companies can take is to limit technical cooperation and digital integration to areas in which Chinese companies are already at an advanced technological level, such as 5G mobile networks, wireless sensor networks, 3D printing, industrial e-commerce, cloud computing and big data.

Act with caution regarding R&D activities in China

Boost your brand presence and reputation in China

Foreign companies need to ensure their products continue to be seen as high-quality and state of the art in China, so it’s worth committing resources to improving your brand presence and reputation in China. This includes having a strong digital presence (including a localised and optimised website), developing and maintaining relationships with prospective leads and customers, and establishing yourself as a thought leader in your industry (for example, by speaking at industry fairs and conferences). Sinorbis can help to ensure your digital presence in China is built on a solid foundation – contact us today to find out more.