Of the over 979 million internet users in China, 78% used search engines (as of September 2021) – that’s over 771 million people. Just as in the West, Chinese internet users frequently turn to search engines to gauge trends and research products, which is why it’s so important for brands wanting to break into the Chinese market to have a strong presence on Chinese search engines.

In this blog post, we take a closer look at the top search engines in China, and give you our top tips for succeeding in search engine marketing in China.

With a market share of around 82.47% (as of September 2021), Baidu is the most popular search engine for both advertisers and consumers. While it has held the number-one spot for quite some time, other smaller players have closed the gap over the years, so Baidu’s lead is not quite as convincing as it once was. That being said, it’s still undeniably the most dominant search engine, so it makes sense to direct most of your Chinese search engine marketing efforts towards Baidu primarily. That being said, Chinese internet users aren’t as loyal to search engines as Western internet users, and will often use different search engines depending on their need.

One thing to note about Baidu is that unlike Google, where PPC ads are clearly demarcated at the top of the page, Baidu PPC ads are much harder to distinguish from organic results. Chinese internet users also tend to be more receptive to ads (unlike Western users, who tend to skip straight to the organic results). It can therefore be worthwhile investing into paid tactics, particularly in the early days while you’re improving your ranking, in order to drive traffic and boost leads and conversions. 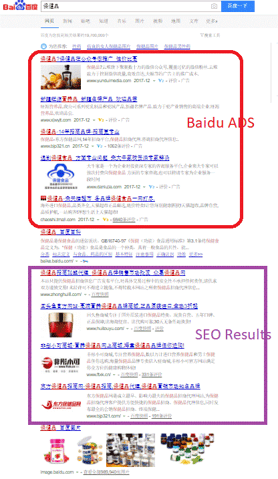 The other thing worth being aware of is that Baidu favours results from their own products, including Baike, an encyclopedia that is comparable to Wikipedia; Zhidao, a question-and-answers website not unlike Quora; and Tieba, a discussion forum platform akin to Reddit. As Baidu will automatically boost pages from these sites to the top of the search engine results page (SERP), it pays to have a presence on these platforms. For example, you may want to build a Baike page for your company.

Baidu is one of the three Chinese internet giants, also known as BAT (i.e. Baidu, Alibaba and Tencent), and it’s important to note that there is very little crossover between them. For example, articles published on WeChat (owned by Tencent) can’t be searched on Baidu.

Sogou (which means “search dog” in English) has been a rising star in the Chinese search engine market for several years, particularly after being strategically invested in by Tencent (the “T” in BAT), owner of social media behemoth WeChat. Recently, Tencent announced it was offering to buy out Sogou – and with Tencent’s enormous resources fully behind it, there’s no reason why Sogou can’t continue to close the gap between them and Baidu. As of September 2021, Sogou holds around a 7.64% market share.

Thanks to its backing by Tencent, Sogou has the unique advantage of integrating social content from QQ and WeChat into their search engine results – content not available to other search engine players. This puts Sogou in a unique position to attract social media savvy locals and provide an abundance of search results. All QQ browsers also use Sogou as their default search engine.

Sogou also has the advantage of having the most popular Chinese input software, Sogou Pinyin, which allows people to type Chinese characters using their keyboard’s roman letters. Sogou has leveraged this to allow brands to feature customisable widgets with product images and links where users can type in a brand’s name, offering brands direct visibility.

Sogou has announced that it plans to focus on artificial intelligence and natural language processing in attempts to build the next-generation search engine. It has said it will shift its focus from more traditional keyword-based search to natural language search, no doubt in the hopes of capitalising on the popularity of voice search.

With around 1.69% market share, Shenma is a joint venture between UC Web and Alibaba (the “A” in BAT), and comes preinstalled with the UC web browser, one of the most popular browsers in China.

Crucially, Shenma is a mobile-only search engine – they call themselves the “experts in mobile search”. Considering China is far and away a mobile-first market, this places them in a good position to grow their market share over the coming years.

Shenma has positioned themselves as the mobile search engine for shopping, apps and books, so it’s certainly worth considering for companies in these industries. Because of its affiliation with Alibaba, the search results can include direct links to product pages on Taobao and Tmall – a distinct advantage over other search engines.

Once the second-most used search engine in China, 360 Search, also known as Haosou, has since dropped to fourth place, with a market share of around 2.26% as of September 2021.

360 Search is owned by Qihoo 360, the largest provider of internet and mobile security products in China; its free antivirus software is the most popular and trusted in the country. They also have the advantage that their 360 browser comes preinstalled on most computers in China, which has helped it grow rapidly. Many businesses also recommend that their employees use the 360 browser for its security features, making 360 Search an ideal channel for B2B marketing – indeed Qihoo claims it is the most secure search engine in China, as it relies on advanced cybersecurity technology to block malicious and fraudulent sites. This can have a positive effect on your brand, as appearing in the SERP denotes authenticity and trustworthiness more so than on other browsers.

It’s worth noting that because there is less competition on 360 Search, there is a lower cost-per-click (CPC) for PPC ads, so you tend to get a better ROI from paid campaigns.

In 2017, Tencent released a feature that caused a stir in the search engine market: WeChat Search.

This may at first seem limiting, but it can in actuality be more far powerful than it looks – on WeChat Search, you can see not just what brands have published recently but also how users engage with that brand and what type of comments they leave. This gives users the kind of social data not available on other search engines.

By being aware of the key differences between Western and Chinese search engines, and adopting a localised approach to your website, you can set yourself up on the right track towards high SERP rankings.

At Sinorbis, we know how to get the results your website deserves. Our team will develop an SEO strategy to suit your target market and optimise your site accordingly in order to achieve top rankings. Contact us today to find out more about marketing in China.