Education levels and fields of study sought by Chinese students

Chinese students study abroad in record numbers, but what level of education are they looking for, and what fields of study are the most popular?

The Master’s degree is by far the most common level of education being sought overseas. 54% of Chinese students choosing to study in Australia are targeting a Master’s, along with 59% (the highest) in the UK and 48% in USA and Canada1.

The Bachelor degree is also commonly sought, particularly for USA, Australian, Canadian and New Zealand destinations. While the UK had the highest share for master’s level degrees, it had the lowest share for bachelor’s degrees, probably due to the high cost of its undergraduate program.

The Master’s and Bachelor’s degrees are the most common level of education sought by Chinese students.

Overall, the most popular field of study for students looking to study abroad is Business at 27%, followed by Engineering (17%) and Liberal Arts (16%). The two lowest scoring fields of study were Medicine and Health Sciences (7%) and Law (5%)2.

Which subjects are more likely to be searched online when Chinese students are researching majors for their degrees at overseas institutions?

In the USA, search volume for the same period was also quite clearly higher when researching Liberal Arts and Art major. That major received five times more searches than Business and Engineering majors, which had the next highest search volume results4.

In the UK, the highest search volume was also for Liberal Arts and Art, two and a half times higher than searches for the second highest which was Business. Different from Australia and USA, the searches on Law and Education in UK institutions are ranked high at third and fourth after Business, although search volume in either of these two majors is less than 5% of Liberal Arts and Art5.

The most popular field of study is Business followed by Engineering and Liberal Arts. 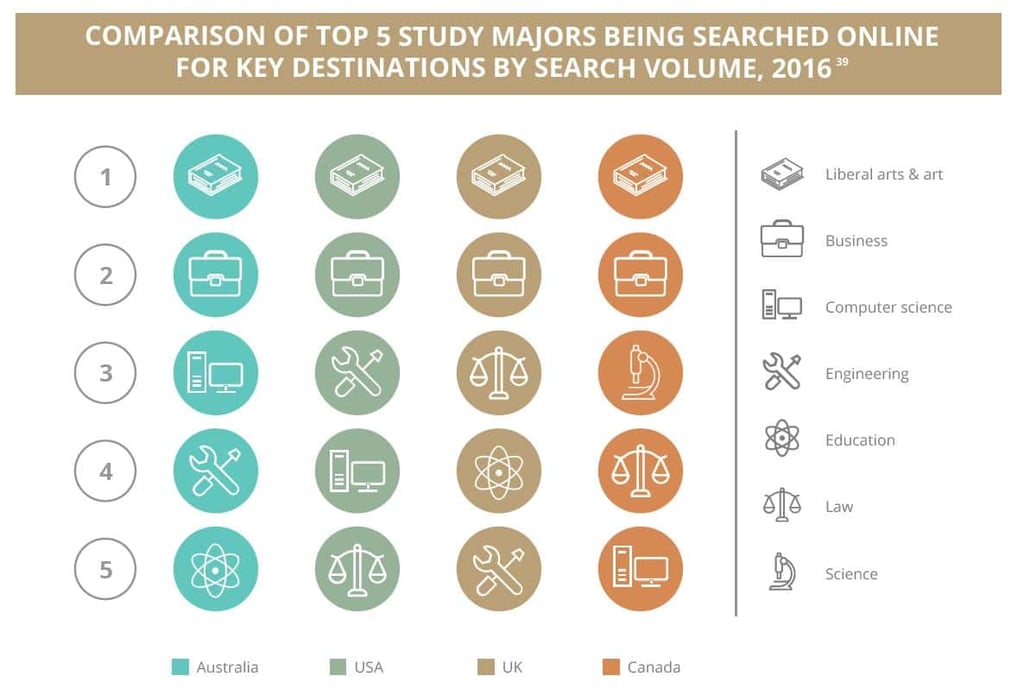 For marketers and education institutions marketing in China, it’s important to understand what level of education and fields of study are popular with Chinese students when studying overseas.