Sinorblog / Chinese Consumers / The differences and similarities between the..

Despite recent geopolitical tension between the US and China, Chinese students remain one of the most important international student cohorts for US universities and the American economy as a whole. Our own research reveals that Chinese students alone inject more than $13.3 billion into the US economy every year.

As the world is slowly learning to live with COVID-19 and international borders are starting to reopen, there’s little doubt that demand for US institutions in China is going to bounce back to pre-pandemic levels.

Education marketers and recruiters who are looking to position their institution favourably in the eyes of Chinese international students and their parents in this rapidly changing world should start by developing a deeper understanding of the differences between the Chinese and the American education system.

Not only will this process allow universities to develop more targeted marketing messaging for their Chinese audience, but it will also help to develop content that makes it easier for Chinese students to settle into campus life at the beginning of the semester because of clearer upfront communication.

In this blog post, we outline 3 key differences between the Chinese and American education systems.

Chinese pupils in urban and developed parts of the country enter the schooling system early at only three years old when they commence early education in kindergarten (also sometimes referred to as pre-school).

At the age of six or seven (depending on the province), Chinese students transfer to primary school which they attend for six years until they commence at junior middle school (also known as secondary school). Three years later they are ready to move on to the Chinese equivalent of high school (senior middle school) which they attend for three years. Chinese students usually finish school at the age of 18.

Chinese parents can decide to enrol their children in either public or private schools at each stage of their education journey. Enrolment in international schools and international classes in private schools in China has been climbing steadily over the past decade, reflecting Chinese parents’ desire to prepare their children with the language skills they need to pursue an education abroad. School attendance is compulsory in China for at least 9 years, making homeschooling illegal. 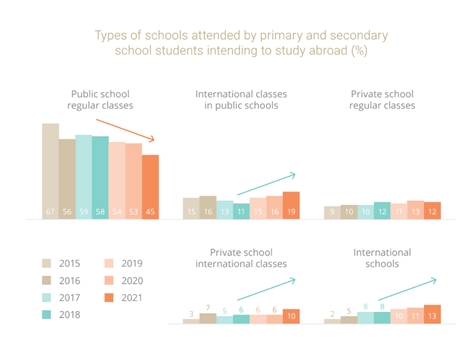 In America, pre-school also starts at the age of 3, but not all parents decide to enrol their children this early. As of 2021, only about 40% of 3-year-olds attend pre-school. This increases to 69% of 4-year-olds and peaks at 88% enrolment of 5-year-olds at pre-schools in the US. The gradual growth in enrolment numbers in American pre-schools can perhaps be attributed to a generally more relaxed attitude toward education in the US.

US parents can decide to enrol their children in either a public or private school. They also may choose to homeschool their children, an option which surged in popularity in recent years.

Compared to the Chinese education system, there is considerable variation in the exact arrangement of grades at US schools. Generally, students attend elementary school from grade 1 to grade 6. Junior high school reflects grade 7 to 9 and year 10-12 is referred to as senior high school. US students generally commence their tertiary education at age 18 with college or undergraduate school.

Getting accepted into university is a vastly different process in the Chinese and American education systems. The Chinese education system is intensely competitive and only the very top performers of each year are admitted into China’s top universities. Who is considered a top performer is determined over the course of only 2 or 3 days when Chinese high school students sit the gruelling national college entrance exam, the gaokao.

The results can be so decisive that some students choose to repeat the last year of high school to reach an even higher score and further improve their higher education prospects. Likewise, Chinese parents have been known to spend significant amounts of money on tutoring to help their children prepare for the gaokao. This is until the Chinese government has recently put a stop to all after-school, weekend and vacation tutoring amidst growing concern for the wellbeing of Chinese students.

While getting into America’s top universities is no easy feat and is also highly competitive, US higher education institutions place a high emphasis on a student’s high school transcript which is a more long-term performance assessment.

Another key difference between the Chinese and American education systems are teaching and learning styles. Traditionally, teaching in China has been much more focused on rote learning and an authoritarian relationship between student and teacher when compared to the US. Consequently, Chinese students have sometimes struggled to adapt to an American style of learning where they are suddenly expected to speak up in class and even challenge the teacher.

This being said, the Chinese government has recognised the need for the education system and the country’s approach to learning to change in order to foster skills such as creativity and innovation that will be needed to shape the future of the country’s rapidly changing economy. This development along with China’s ambition to become a leading destination country for international students in its own right is making major reforms of the Chinese education system increasingly likely and will be an interesting space to watch.

Interested to learn more about the role of Chinese students in the US higher education system? Download our latest report to find out why Chinese students will continue to study in the US and the digital recruitment strategies you should leverage to attract them.