Sinorblog / Chinese Consumers / Who makes the decision when selecting an overseas..

Who makes the decision when selecting an overseas university

As digital marketers, it’s important to get your message straight to the decision maker, but who is the decision maker for Chinese students when they are selecting an overseas university? Traditional Chinese culture would indicate that parents are the decision makers, but times change, and the millennial generation is becoming increasingly independent and have more to say about their education than their parents or grandparents did.

During 2016, 35% of decisions to study abroad were made by Chinese student alone, and another 35% of cases it was a joint decision between the parents and the student. In only 20% of cases was the decision made by the parents alone. When comparing the figures from 2015, there is a slight trend towards students having more involvement in the decision making, either with their parents or alone1. 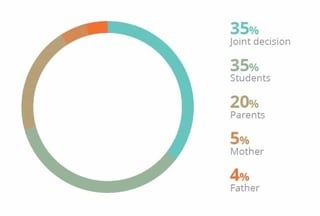 35% of decisions to study abroad were made by the Chinese international student alone, and another 35% of cases it was a joint decision between the parents and the student.

Students and their parents have different preferences when making choices for overseas education. As an example, when comparing parental choices to that of the students, more parents preferred their child to study in the USA, ie 54% for parents versus 45% for students. 33% of students favoured the UK, while 25% of the parents agreed. 23% of parents liked the idea of Canada in comparison to only 16% of students. Both students and parents favoured the idea of Australia almost equally (20% to the student and 21% to the parent)2.

Naturally, as the students age, and the higher education level they seek, the more power they will have when it comes to making their own decisions. Digital marketing strategies for marketing in China need to take that into account and formulate the right message for the right market. Think about the education level students are seeking and how that affects the decision-making structure, then design messaging to appeal to the decision maker (parents, students or both) and select the most suitable message channels accordingly3.

As the students age, and the higher education level they seek, the more power they will have when it comes to making their own decisions. 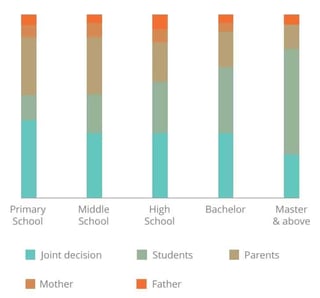 When deciding on where to study, students and parents both agree on the top five factors when deciding which destination country the student would study in. They are:

Unlike parents, though, students rate the culture of the country more highly, with a difference of 10 points (42% to 32%). This is the factor with the most significant difference between opinions and, as it is also the second highest factor influencing the final destination decision, it is important that marketers understand this4.

The top five factors influencing choice of destination country are education quality, culture, the overall competency of the country, favourite elite school and an advantage in some field in that country.

There were slight differences in the reasons why students selected their host country. Australia and New Zealand were chosen regularly for their better environment, while the USA was chosen based on perceived education quality and the UK often selected for the culture of the country.